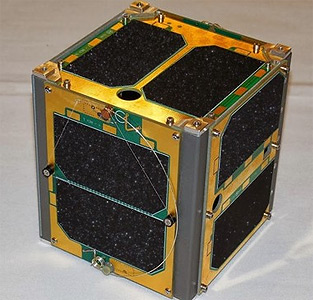 Fox-1C is an 1U CubeSat designed to operate in Low Earth Orbit built on the flight spare of Fox 1A. It carries a 2 meter whip antenna and a 70 cm whip antenna.

As affordable launch opportunities for amateur communications satellites become more rare, AMSAT deviced a new strategy: a small cubesat, which hosts both an amateur communications payload as well as a scientific or technological payload, so that the satellite qualifies for launches in sponsored programs like NASA's Educational Launch of Nanosatellites (ELaNa) Program.

Fox-1C will carry a radiation effects experiment developed by the Institute for Space and Defense Electronics (ISDE) at Vanderbilt University, a Virginia Tech camera experiment, and a Pennsylvania State-Erie MEMS gyro experiment.

Fox-1C will also serve as a communications relay for amateurs worldwide via the onboard FM repeater system. The communications and experiment missions will run concurrently. The repeater features a VHF downlink with FM analog voice and FSK data and UHF and L-band uplink.

CITATION NEEDED - https://xkcd.com/285/
Most Recent Observers
Data Frames Decoded - 30 Days
There is no decoded data for this satellite in the last 30 days.
Click here to see the full dashboard for FOX-1C
Decoder: FOX-1C Telemetry