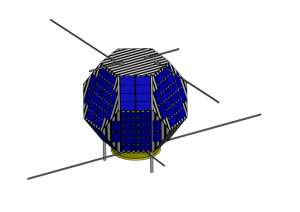 Shin’en 2 is a satellite that was developed as a student project of the Kagoshima University, Japan. Shin’en 2 will carry an amateur mode J linear transponder into interplanetary space. Shin’en 2 will be inserted into an elliptical orbit between Mars and Venus. The orbit will have a near zero inclination keeping the satellite along the Earth’s equatorial plane. The satellite will orbit between 0.7 and 1.3 AU. 1 AU is equal to the distance between the Earth and the Sun.

No observations recorded for FO-82

Data Frames Decoded - 30 Days
There is no decoded data for this satellite in the last 30 days.
No Decoders Found
Help us develop a decoder, you can find instructions at this wiki link
No Satellite Suggestions Found