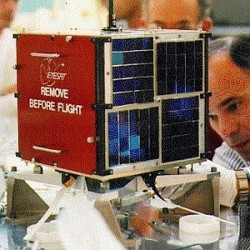 AO-27 is an amateur satellite constructed by the Amateur Radio Research and Development Corporation (AMRAD) at the facilities of Interferometrics in McLean, Virginia. It was originally designed as a commercial satellite known as EYESAT-1 but its completion was halted part way through the project. An agreement was made for AMRAD to finish the construction of the satellite and add an amateur satellite transponder. AO-27 is an “FM Repeater” in space. It essentially consists of a crystal controlled FM receiver operation at 145.850 MHz and a crystal controlled FM transmitter operating at approximately 436.795 MHz.

https://www.itu.int/online/snl/satbandold_snl.sh?ntc_id=119500202&fr1=8000&fr2=8300&ie=y&sat_type=&sat_name=EYESAT&sel_satname=EYESAT&plan_id=
Most Recent Observers
Data Frames Decoded - 30 Days
There is no decoded data for this satellite in the last 30 days.
No Decoders Found
Help us develop a decoder, you can find instructions at this wiki link
Orbital Elements
Latest Two-Line Element (TLE)